Time is on Your Side (SCBWI:Take Two) 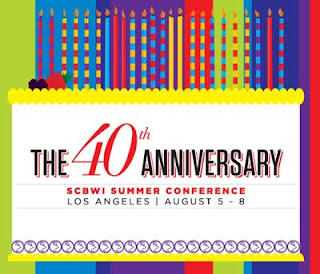 Informing Song of the Day: "Time is Running Out" by Muse

Yesterday we showed you what we did at the SCBWI LA Conference through some very professional cell phone photographs. And we promised we would share some of the highlights today. There were sooooo many major moments that we witnessed, keynotes from Libba Bray, Gary Paulsen, and Richard Peck. Sessions with editors Jennifer Hunt from Dial, Alessandra Balzar , and authors Sarah Stewart, Bruce Coville, and Laurie Halse Anderson. And although EVERYTHING we did this past weekend was full of awesome, perhaps the most awesome was Laurie Halse Anderson's session on making time for writing. 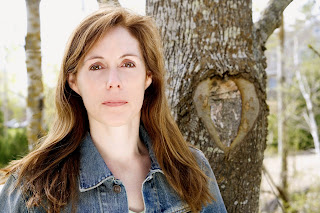 I must admit, I'm a little biased. I went into the session KNOWING I was going to adore whatever came out of her mouth--she is one of my fave writers after all. But when me and Pam entered that room and became engrossed with the talk, (just like the other people squeezed in the tiny room with us) I knew Ms. Anderson was giving us some truly GREAT advice. Okay, I'll stop teasing and get to the deets.

Before that session, we were quick to say things like:

"But, we don't have any tiiiime to write!"
"We can write after So You Think You Can Dance goes off."
OR
"Who can maintain a full time job, a family, and writing? Only a super hero!"


Now, after listening to her speak (no pun intended) we understand that using all of those excuses was our way of masking the fear that we have about writing. Ms. Anderson said that when we write about teen emotions we're usually revisiting those times in our lives, leaving us vulnerable. That vulnerability leads to fear.

How do you get rid of that fear and stop making excuses then? Ms. Anderson had us do two quick activities where we list our "Top Five Time Consumers" --we had to put the top five things that take up our time on a daily basis. TV showed up on both mine and Pam's list. Then we had to write the five most important things to us...TV showed up on my list again. I had to be honest. This made Pam and me realize that we spend WAY too much time watching TV. So, as soon as the session ended, me and Pam scurried to our room and did this: 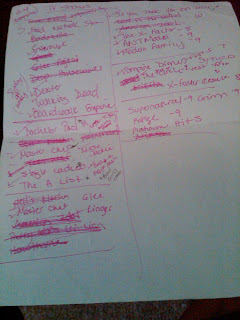 **If you look real closely,you can make out the titles...what do you see that you're guilty of watching, too :)**

That is the list of every TV show we watch during a given week. We went through and scratched off the shows we were willing to give up, made a note of "maybes" --the shows we would give a trial run, and then checked off the gems we knew we couldn't stop watching (Supernatural, Boardwalk Empire, anyone??).

And then we felt a weight lift off of our shoulders. Now, we won't fall back on those old excuses and we will do what Laurie Halse Anderson quoted from William Faulkner: "Don't be a writer, be writing."

Tell us, what are some of your time wasters? And what are you willing to give up???

Posted by Marquita Hockaday at 8:00 AM

My biggest time waster is TWITTER! Because it's always there, a tab away, while I'm writing.

Love the blog. Here's mine ...
http://adventuresofyawriting.blogspot.com/2011/08/what-attending-writers-conference-is.html

It's TV. I know it is. But it's summer so most of the shows I love aren't on. Except True Blood. I can't give it up.

But I can give up others and intend to. Also no additions. And I tape them so I can watch late at night or fast forward thru commercials to save time.

It's so easy to fall victim to the time sucks. For me, I've started leaving the house at night and going someplace where there is no TV or internet. Cruel but it works.

I love Laurie Halse Anderson too. I used to watch a ton of TV but I've cut back a lot. My husband and I got rid of cable to save some $ so now everything I watch is online. It prevents me from watching stupid shows because I'll only go out of my way to watch the best shows online. :)

Thank you, the article is very petrifying, hopefully it can be useful for everyone.

thanks, his article is very helpful

thanks, his article is very helpful

Continue to Perbiki his blog to get a good blog !!

This article is interesting and useful

Thank you, the article is very petrifying, hopefully it can be useful for everyone.