Write What You Know?

Workout Song of the Day: "Your Heels" by Day 26

Here's the thing, I'm given the same advice during every workshop/conference/casual encounter: write what you know. Simple enough. Except if you want to write fantasy, then that's a whole different ballgame (unless you happen to actually know a vampiric wizard from another planet).

I'm a contemporary writer. Very straightforward. I like writing about inner conflicts, and having these confrontations come into play based on social interactions. Believe me, it's way more exciting than it sounds. I tend to base many characters on people that I know or observed or briefly met. And that's how I came to my most recent problem: what if you're writing about someone that you don't actually like?

I was having a blast during the first few paragraphs--clearly over-exaggerating every irritating habit of Loud Former Coworker (LFC). But then the guilt set in. Am I going too far? What if LFC actually reads my piece (highly doubtful) and realizes my inspiration? Now I'm trying to decide if I should just continue with the story, or resolve my conflict with this person face to face. It's easy to vent behind a laptop, but confronting this person is a little intimidating. I have to put some thought behind this one--without stuffing my face with pizza or cheeseburgers. Baked potato chips, anyone?
Posted by Pam Harris at 1:27 PM No comments: 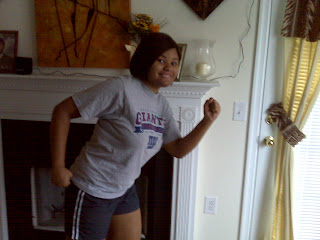 Workout Song of the Day: "You Oughta Know" by Alanis Morissette

Okay, so writers have a reputation of just sitting around and, well...writing. Of course, I know that this isn't true, but I had to rethink this assumption as I had to go up a size on my latest shopping excursion.

This isn't about vanity--though I must say I would love to rock some skinny jeans without a muffin top. This is about being physically fit; I'm tired of being out of breath when I climb the stairs to my 3rd floor apartment. It's embarrassing. When a neighbor tries to speak to me, I have to smile through gritted teeth while a trail of sweat trickles down my forehead.

I went out for a 40 minute walk today. Eventually I'll jog, but...well, I'm lazy. Baby steps for now. And I don't want to burn myself out before I reach my goal. I may be participating in NaNoWriMo for the first time this year, and I'm going to have a time juggling that massive amount of writing (not to mention working 2 jobs and completing assignments for my MFA) with my new workout schedule. I would love your support. In the meantime, check out my Day 1 pic above. You will notice that I'm smiling because this is pre-walk.
Posted by Pam Harris at 9:02 PM No comments:

Okay, so I'm not new to the blogging game. I've been running one for a whole TWO MONTHS as part of my day job (shameless plug: visit smscounselorcorner.blogspot.com if you want any insight on counseling middle school students...or if you're really bored). However, this is the first time exposing my ain true love for the whole world to see. My parents don't even read my writing--though I'm not sure if I should take offense to that.

But here's the deal: I write, you read. Heck, you can even write to me in the comments section and I...drum roll please...may even write back! Who would've thunk it? And now because I'm annoyed by my own sarcasm, I'll take the sincere approach. I would love it for you all to follow me on my journey in becoming a published author. We can share funny stories, cry on each others' virtual shoulders, and I may even be bold enough to provide writing/editing tips--though I'd much rather be on the receiving end of the latter.

So, care to dance? Don't be a wallflower and join in on this party! As I don't see the direct analogy between dancing and writing, I'll drop this metaphor and let you enjoy the rest of the site. :)
Posted by Pam Harris at 6:30 PM 2 comments: