As some of you may know, Quita and I attended the James River Writers Conference this past weekend--and we had a BLAST. We have oodles of news to share with you guys, including info from panels featuring MG/YA superstars, Jacqueline Woodson and Lauren Oliver (and she actually TALKED to us--plus personally signed Quita's book. She's so chill!). Unfortunately, I left my notes all at home (where I'd like to be at the moment, but once again, I digress), but we'll be sure to spread the love next week.
I saw a recent post on Blue Lipstick Samurai's blog (which if you aren't following, you need to. Like now) where she asked what we have learned so far while writing our projects. It occurred to me recently that I have been officially writing/revising/slaving over Wants for a year. A whole year! I haven't even kept a guy around for that long. I'm getting ready to send my final revisions to a handful of agents this weekend, and I'll keep my fingers crossed that someone will actually bite. If not, I'm laying Wants down to rest for a while and moving forward.
So, as I possibly close a chapter on this journey, what have I learned this past year?
1. Your cousin is your best friend. Seriously, Quita has been awesome this past year. I think I've made her read this manuscript like 97.4 times--but she always manages to find something to put a smiley face by. And though her eyesight is WAY worse than mine, she always spots mistakes that I keep missing. She probably knows my characters better than me at this point. And I think she's actually in love with one of them.

2. If all else fails, mention The Karate Kid. I submitted a few chapters to my MFA workshops, and one of my classmates (who just happens to be a movie fanatic. He has tattoos of actors all over his body. Seriously) said that a section of my story reminded him of The Karate Kid. He then started to recite lines from the movie and compare it to my scene.
I wanted to hurt him.
But then I thought about it and saw that he may have a point. Although my story has nothing to do with a wimpy kid being chased around by thugs in skeleton costumes, I did need to be careful with cliches. So I made a character reference the movie to let readers know I was in on the joke.
3. Revisions are your your best friends. And enemies. And mistresses. It's true, I have a love/hate relationship with the whole revision process. Wants has undergone 4 major revisions (and that's not counting line edits). First, it was an adult novel. Second, I wrote it all in third-person past tense. Third, I switched it all to first-person present tense. And fourth, I went through the whole manuscript to make sure that each character (I have four POVs) had his/her own unique voice. Was the process painful? Yes. Was it worth it? HELL yes.
4. Think twice about writing in multiple POVs. That is all. 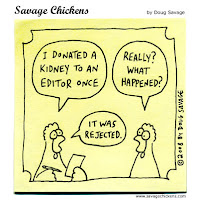 5. Rejections don't always suck. Yes, they do about 99.8% of the time. It got to the point where I didn't get excited when I saw a reply to one of my queries/submissions. I would just roll my eyes because I knew, once again, someone didn't click with my story. But the more I revised, the more personal my rejections got. Agents were seeing potential. Some asked for a revision. Others didn't scoff when I wrote them months later and asked if they'd like to see a revision. My craft was improving, and agents really do notice when you're putting in the extra work.

So, there you have it. My long, bumpy road with Wants has made me a better writer overall. Even if it doesn't leave a dent in the literary world, it's definitely helped me grow. Do you all have any lessons you'd like to share with us??
Posted by Pam Harris at 8:01 AM

I know that we, your loyal followers, constantly praise you two for the information you so willing share, but I have to tell you that this post made me super excited! Not just for the progress you have made in your revisions, but it made me think that maybe, just maybe, MIX TAPE still has a chance.

I have totally given up on it and I now think that if I do a major overhaul on it, then it might click with someone who rejected me in the past that happened to love the idea of my book.

So, thank you for sharing your hardships and your dedication to your "baby", WANTS.

Next question... do I write from scratch? Or tear-apart and put back together? Hmm... sounds like a possible post: When the idea is amazing, but the writing is shotty, how do you fix it? Start over or edit, edit, edit?

Ah, the thorns that line the road to publication! I know nothing about that, but I'm dying to find out! LMAO at #2...I can't believe you put that in there! You had me laughing out loud at work! Thanks for sharing this! My fingers are crossed for you and I'm sending out some positive energy into the universe! :)

5 - They sure don't. I've had lovely, polite, and encouraging rejections.