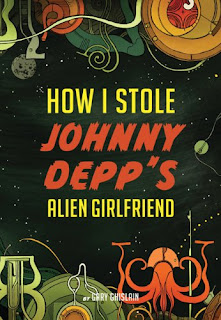 
We told ya we'd have more Debut Author Challenge to share with you guys :) This time, we're going to introduce you to a fun, light (hmmm, that's slightly debatable b/c there are some high stakes in this book) YA (possibly older MG) novel called How I Stole Johnny Depp's Alien Girlfriend by Gary Ghislan.


The title is pretty self explanatory but just in case you want more, here is what Goodreads has to say:


David Gershwin's summer is about to take a turn for the weird. When his dad's new patient Zelda tells him she s from outer space and on a quest to take Johnny Depp back to her planet, he knows he should run away screaming. But with one look from her mean, green eyes, David's hooked, and soon he's leaping across rooftops, running from police, and stealing cars just to stay by her side. He might not be a typical hero, but David's going to get the girl even if it takes him to the ends of the earth or beyond.

Yep, it's as fun as it sounds. Just in case you need more convincing, here are:


The Top Four Things You need to Know about How I Stole Johnny Depp's Alien Girlfriend:
1. The MC has Crazy Voice!: David is the son of a psychiatrist who witnesses crazy teens on an almost daily basis. He's clumsy, nerdy, and he makes lists to spell out the zany situations he gets caught up in. He is also a typical fourteen year old boy who loses words at the sight of boobs--I loved the authenticity of this character even while being wrapped up in alien politics.

2. The Love Story: When the book begins, Zelda is introduced as a sixteen year old lunatic who thinks she is from another planet. David finds himself enamored by Zelda almost right away and the story blossoms between the two from there. It's really sweet how it starts as a cute (although abusive--Zelda is fierce!) friendship.

3. Realistic Family Dynamic: Mom and Dad are separated, Mom is evil with a rich lifestyle and a new boyfriend, and David's older "stepsister" is a Bohemian drifter who hates her dad and David's mom. All of the characters come to life and again I liked how much reality was in the background of all of the alien craziness.

4. What's at Stake: What's more timeless than a story about someone looking for love? Of course, this book takes it to a whole new level when the person looking for love is an alien searching for a celebrity like Johnny Depp. Also, I like how Ghislan doesn't hold back on the explosions, butt kicking, and alien powers as David and Zelda travel in search for Captain Jack.

Books: I Am Number Four by Pittacus Lore, Roswell High Series by Melinda Metz, and Girl Parts by John M. Cusick...then you'll like How I Stole Johnny Depp's Alien Girlfriend.

Movies: Earth Girls Are Easy, Disturbing Behavior, and The Faculty ...then you'll like How I Stole Johnny Depp's Alien Girlfriend.

But, wait! That's not it... just as we did with Crystal Allen's How Lamar's bad Prank Won a Bubba-Sized Trophy, we are going to give this gem of a book away!!!! That way you can enjoy the alien antics as well :) All you have to do to win is leave a comment on this post by Midnight on July 5th, 2011 and be a follower of this blog. So easy :)

BTW- have you read any good debut author books lately? If so, share--even though our To Be Read Piles will hate you.
Posted by Marquita Hockaday at 8:00 AM

SEND ME THIS BOOK.

I would read this just for pointers on how she was planning to kidnap Johnny Depp.lol

I love Johnny Depp, so I think all his alien girlfriends should be abducted. lol

Oh, and I totally agree with Marsha.

Ha ha, this is awesome. I just finished DIVERGENT and wow! Definitely at the top of the dystopian genre.

This sounds so good! Thanks for the giveaway.
GFC name:Erinberry

The best debut I've read recently would have to be MOONGLASS by Jessi Kirby. It's beautiful.

DUDE THIS SOUNDS AWESOME!!!! Sign me up for a giveaway/

Glad so many people are excited about this book. And Abby--yay!! I knew you'd love Divergent. :)

Count me in :)
GFC follower

I won Lamar (which I still haven't read... it's on the pile), so I won't enter here-- but I wanted to say, thanks so much for reviewing this! I was really curious after seeing the title.

It does sound like a fun read! And I like that it has a love story in within it. Sadly, I had to drop out of the debut author challenge. :( I'll still be reading a couple of the books though! Hoping to catch up on my reading after August (if you know what I mean.)