It's All About the Risks

Risky Song of the Day: "Risk" by The Deftones

This past weekend me and Pam attended our regional SCBWI conference in Dulles, VA. We drove over four hours (traffic was a mean, cranky bee-yatch) and endured getting lost about three times to hear people like Meg Medina, Jennifer Rofe of Andrea Brown Literary Agency, Quinlan Lee of Adams Literary, and Han Nolan speak. And the torturous ride was definitely worth it.

There were three different panels with agents, authors, and editors. We learned plenty about how to market your book, what agents look for when going through submissions and what YOU should look for in an agent, as well as what editors think about characterization and voice.

But perhaps the most inspiring part of this conference was when Han Nolan gave her keynote address, entitled "Risky Business" and omigod, did this hit home for us.

Right before Han Nolan gave her speech, me and Pam had lunch and we discussed some of the things we'd heard earlier in the conference, as well as other things that we've heard/seen around the web. Two of those things were: the agents don't like "angsty" teen books, they want lighter, more humorous materials, and historicals are hard to sell. And I immediately thought, that's what we write. We write stories that are hard to tell--about murder, drug use, kidnapping--the ugly parts of the real world. And I also write historicals. I told Pam, "I think I should change my NaNo idea. Write something lighter." She told me not to listen to what anyone says, to write what I wanna write...but I still had my doubts. 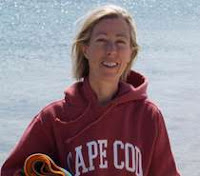 Then we sat down and Han Nolan spoke. She told us about her first novel, If I Should Die Before I Wake and how it got bad reviews but eventually became a huge success. She told us that despite all of her hardships, despite naysayers, she stuck with writing. With this risky business. Amongst many other things, she told us it's a risk to strive for excellence and excellence only comes through hard work. So, sure I've been working on both my angsty and historical manuscripts for two years, but that's the hard work--that's the risk. And my first drafts are AWFUL--but that goes with another thing Han told us, allow yourself to be terrible and don't stress over failures. When you fail, it makes your successes that much better.
It was very inspiring to say the least. And me and Pam both have vowed not to shy away from the risks. We'll keep writing about the dark and scary sides of YA if we feel the need to tell the story, and if those stories are failures, so be it. At least we know we've taken the risks.
What about you all, are you willing to take the risks involved with the business of writing?
Posted by Marquita Hockaday at 8:00 AM

Good for you, ladies! From what I understand, there are a million and one opinions out there about what sells and what agents are looking for. I don't know about you, but my reading tastes are quite varied, which means there's room for all different types of stories in YA. Write the story that you want to tell, and stick with it!

Glad the conference was so fun and informative!

"allow yourself to be terrible and don't stress over failures" I need to tattoo that on my writing hand.
Great advice, and thanks for sharing it.

I agree with her. In fact, I think you almost HAVE to take risks if you want your writing to be any good. Playing it safe is fine and you can get published, but I truly believe that only the risk takers get remembered.

Sounds like you had a good time. Glad you got to go.
I agree. I think you should write what you want to write. Writing what you think an agent will want to read or something lighter just because you think it will sell won't work if your heart isn't into it.

I agree! The speech by Han Nolan was my favorite too. Taking risks in writing and not getting complacent isn't something that I thought of before, but it's something we really should be thinking about. Keep writing your book Quita! I bet with every draft it gets closer.

This is great advice! I agree that it's worth taking risks. I never fail to be inspired at SCBWI events/conferences. :)

That does sound inspiring :) and I'm totally in agreement.

What an inspiring post! I completely agree with Pam, Quita. You should stick to writing what you want to write. I agree with taking risks. You have to take risks because our industry itself, IS risky. Great post! :)