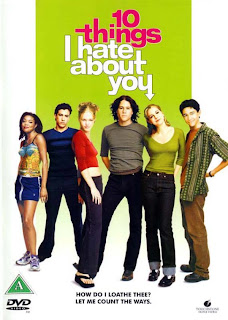 Workout Song of the Day: "The Bird and the Worm" by The Used

There's an interesting conversation going on at YA Highway about the lack of new ideas. Sounds kinda morbid, but it is kinda true (I know all of my former English teachers are wincing right about now). There's really only a handful of storylines that are recycled over and over and...over again, but talented writers know how to bring a little something, something to it--that's swagger talk for "a new twist."

Let's think about this. Lisa Dierbeck's One Pill Makes You Smaller is a graphic retelling of Alice in Wonderland. Sex and the City is just like Golden Girls without the Polydent. Westside Story is pretty much Romeo and Juliet with singing and men confident enough to do high kicks in very tight jeans. Every new story is rooted in a traditional tale.

Speaking of Romeo and Juliet, I have been thinking of a new way to retell one of my favorite Shakespeare plays and bring it to the YA world. Yes, I know that this has been done tons of times before, but I think that modernizing classics encourages students to actually take a look at the original works. Here's a list of my top 3 "revisions" of good ol' Shakespeare (all of these are movies since I LOVE to eat popcorn):

1. Hamlet starring Ethan Hawke and Julia Stiles: This is my absolutely FAVORITE Shakespeare play of all time, and Ethan played the title role with the perfect balance of subtlety and craziness. Sure, the Mel Gibson and Kenneth Branagh ones may be more popular, but I think Ethan's better to look at.

2. O starring Josh Hartnett, Mekhi Phifer, and Julia Stiles: Think Othello on a basketball team. Not only does this movie capture the essence of the play, which is jealousy and betrayal, but it does so from a teenager's point of view. O makes the gossip mill that's in every school building a bit scarier--and it allows you to see the tragic consequences of spreading a rumor.

3. 10 Things I Hate About You starring Heath Ledger, Joseph Gordon-Levitt, and, whaddaya know...Julia Stiles: Someone needs to find another Shakespeare play to adapt because I think that Ms. Stiles is seriously underrated. This film is a teen comedy take on The Taming of the Shrew. When my cousin and I first saw this movie in theaters, we pretty much blinked the whole way through. Now, it has become a cult classic--and it gave us a fine introduction to two of our favorite actors (we miss you Heath!).

So, as you can see, good stories can still be told--just make sure that you add your own personality to it. What are some of your favorite retellings?
Posted by Pam Harris at 1:14 PM

Hmm...would 30 Second's to Mars video for The Kill count? It was a retelling of The Shining, right? No, seriously I really liked the "African-American" version of The Awakening by Kate Chopin, Their Eyes Were Watching God by Zora Neal Hurston. The basic idea behind both novels is the same, but the language,tone, and setting of Their Eyes...was just more inspiring and intriguing. I also love the retelling of Brokeback Mountain by Annie Proulx. It was a short, short story that was turned into a brilliant, heart-wrenching, beautiful love story! Great post and a really wonderful idea...and here, here to the message to Heath!

Great post! I love retellings, particularly because you already know how the story goes and you want to see how the author twisted it or changed it to make it different. It can be a challenge to modernize things that just don't translate well in modern culture. I myself have never tried it. :-P

Also, an awful-but-so-entertaining remake of Twelfth Night is the movie "She's the Man." It's so ridiculous but I watch it when I'm feeling bummed out. And also, a book called "Rule of the Bone" by Russell Banks is a retelling of Huck Finn that's pretty interesting.

I'm going to have to check out that Russell Banks book. And Quita and I were also quite entertained by "She's the Man"--she forced me to watch it to drool over Channing Tatum. :P

Never realized how many Shakespearean retellings Julia Stiles was in! Not complaining though - I love her. :)