Gone But Not Forgotten Blogfest!!! 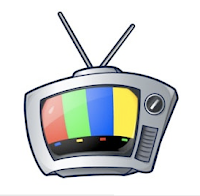 Blog Hopping Song of the Day: "Gone" by N SYNC

It's FRIDAY!!! Not only the end of the work week for us, but also the day we get to share our favorite shows that are no longer making new episodes.

We had MAY-JAH fun with Alicia, Holly, and Erinn when we did the Page 99 Blogfest a while back, so we teamed up with them again to bring you the Gone But Not Forgotten Blogfest. Click here to see who else is hopping in this fest!

We luvs us some TV. It's an escape (and sometimes a distraction) but we can't tell you how many ideas we got from some of our faves like Prison Break and Friends. As writers, TV shows are very helpful to our craft. As a matter of fact, our # 1 fave show taught us a lot about pacing, voice, and awesometastic dialogue!

Here are our TOP 5 Gone But Not Forgotten TV Shows:

Eastwick: This show starred Rebecca Romijn, Lindsay Price, and Jamie Ray Newman. It aired from 2009-2010 and only had about 13 episodes. But they were GOOD! The show put a spotlight on three women in a small town who were beginning to come into their powers as witches. There were hi-jinks, deaths, omens, and love triangles. Who can ask for anything more?? 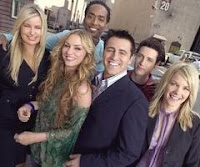 Joey/Freddie: This was a tie b/c we couldn't get enough of both comedies. Joey starred Matt LeBlanc as his character from Friends (another one of our faves- could we BE loving any more shows?--please excuse the grammar for the sake of a good Chandler Bing impersonation). The comedy followed Joey and his sister played by Drea de Matteo when he moves to Los Angeles to pursue his acting career. It aired from 2004-2006 and had 46 hilarious episodes. Freddie starred the man himself, Freddi Prinze Jr., as a Chicago chef living with three generations of female family members. His best friend was played by a very funny Brian Austin Green. This one aired from 2005-2006 and had ONLY 22 episodes. We heard some of the funniest lines ever from this show and couldn't believe it was canceled!

Fastlane: Fastlane starred Dr. Carlisle Cullen himself, Peter Faccinelli (looking sexy as evah!) and Bill Bellamy as two smooth, sarcastic, and hilarious cops forced to work together by their siren of a police lieutenant played by Tiffani Amber Thiessan. Most of the charm of the show came from the interactions between Bellamy and Faccinelli. They had contrasting personalities, but you could tell they would kill for one another--and it was awesome seeing Thiessan in a position of power over these two boys.

Terminator: The Sarah Connor Chronicles: This show starred Lena Headey as the show's namesake and Thomas Dekker (cutie!) as her son. Their relationship was touching and realistic and one of the things that made this show work so well. Oh, and there was a kick ass machine. Summer Glau played the bot sent to protect Sarah and John Connor. Brian Austin Green also cameoed as John's uncle (are you seeing a pattern here?) Between the relationships, the technology, and the bad guys, Terminator kept us entertained, guessing, and intrigued. This was a show that was clearly too advanced and smart for the American public (no offense to any of our blog readers/friends--you are all very intelligent). The SC Chronicles aired from 2008-2009 with 31 episodes. 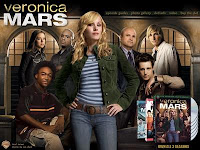 Veronica Mars: Oh yeah, V Mars, yeah! This was the ultimate of teen dramadies during its time. Veronica Mars aired from 2004-2007 and had 64 episodes. This was not NEARLY enough! The show starred the cute and sneakily funny Kristen Bell as Veronica Mars--the teenage detective, solving murders, thefts and the like for her high school (and sometimes adult) friends. The show focused on Mars and her crafty detective skills, yes, but it also highlighted teen and parent/child relationships. Mars was so realistic; she seemed like a girl you could meet by your locker in the high school hallways. And the crimes that she had to solve were always so unique and clever--just like V Mars herself. The show was smart with pacing and never went into the cliched realm of plots. They even managed to transition Veronica to college smoothly and still keep viewers intrigued--people are STILL fighting for V Mars to come back to us in some shape or form. As we mentioned above, this show helped us to understand sarcasm and wit and encouraged us to try it with our writing. We could go on and on about Veronica Mars, but we will end with this statement:

BEST TV SHOW EVER!!! Hands down.

Okay...so we cheated by making a "tie" but we couldn't decide! What about you, what show (s) do you wish you could see new episodes of?
Posted by Marquita Hockaday at 8:00 AM

I actually watched Joey, too! Wish it had lasted longer...

My brother was a huge Fastlane fan! And may I say, Dr. Cullen looked amazeballs with long hair... *drools*

Thanks for hosting the blogfest, ladies!! And GREAT list!

My top gone but not forgotten TV shows would have to be My So Called Life and Freaks and Geeks. Love those shows!

Is it sad that I've never heard of most of these? *hangs head in shame*

You are so right about Veronica Mars. Love that show!

I thought I was the only one who loved Freddie!! Man, that show always had me rolling!

For Shame on me, but I haven't heard of LOTS of these shows. I remember Joey. I do miss V mars a lot.

Great picks. Thanks for joining in on the fun!

Mrs. DeRaps, I posted the same two shows on another thread!! Anyone who hasn't seen them has to start now. They break your heart, partly because they end so fast.

Oh my- I don't know any of these, but I definitely need to check out Veronica Mars. thanks!

I'm with you on The Sarah Connor Chronicles...that show was awesome!!

I thought the Terminator show had potential but they needed better scripts.
Veronica Mars I only discovered after it was off the air but really good show.
Thanks for sharing!

I haven't seen any of these.

Funny--I only have seen Veronica, but I LOVE Veronica--her dry snark is exactly my humor.

Great list. :) I'll have to check out some of these. I couldn't watch Eastwick because I tried to read Witches of Eastwick and ended up throwing it across the room. More than once. It would probably be much better as a show!

Veronica Mars sounds great, how the heck did I miss it?? My kids were probably hogging the tv...or was it the husband? Sigh. Great list!

You've convinced me...I seriously need to check into Veronica Mars. I watched part of the first season, years ago, but I got sidetracked by one book or another.

I loved Joey!! I forgot about that one -- definitely nixed before its time. Veronica Mars sure made a lot of people's lists. I'm going to look for that one in syndication!

Ooh, I forgot about Joey! It could have been awesome. Joey was my fave character from Friends, and I was so happy when I heard they were doing a spin-off!

I agree with you 100% about Veronica Mars. It's such a shame that it had to end. And I actually never watched Joey even though I loved Friends. I think I was too busy mourning the lost of the others, but I think enough time's gone by that I should give it a try! hehe

I haven't heard about most of these.

I wanted to watch the Sarah Connor Chronicles but I forgot about it!

Never watched Friends. Out of the ones you mentioned--Terminator and Eastwick. But MY favorites? Buffy, Angel, Charmed, and Witch Blade (Yancy Butler); a few others as well.

Okay, I'm going to sound like a total dork for saying this but...Star Trek: The Next Generation. It was one of my favorite shows as a kid and it remains one of my fave shows today. I'd love me some more Captain Picard!

OMG, Sarah Connor Chronicles was one of my all time faves. Can't believe I forgot it! And the way they left us hanging? Criminal!!

Joey was really funny. I liked the nephew, the guy from Road Trip, and poor Andrea Anders. Veronica Mars all the way!

ahh, i really need to see veronica mars! everyone seems to have it on their list.

I loved Joey too! I can't understand why people didn't like it. So what if it wasn't as good as Friends - it was a completely different show!

Ha! I remember Veronica Mars! There was this TV show called Lipstick Jungle based on Candace Bushnell's novel, I wish they would bring it back! Sigh...